Gambling Your Heart and Your Loves With the Cancer Dice…

I woke to a regular Sunday, all the animals excited and eager for breakfast (let’s remember I live in a house of hogs!) and happy to partake in a little extra egg from the skillet dish I made. Yes, our Lil Fella, robust kitty extraordinaire, was quite happy to come over and beg with the rest of them. The day carried out with typical events and we took many photos of the new kitten, Milton, snuggling about with Lil Fella in the bed they both love.

Then something changed. Lil Fella did not get up for dinner. I should share that this old man came to our home near a whopping 25 pounds and has ever so wonderfully dropped down to 16.9 (ish!) over the past 3 years. And if you haven’t read the previous post, he is about 1 year out from his first of two surgeries for salivary gland adenocarcinoma.

Around three weeks ago, I came home after a conference and realized Lil Fella was meowing a bit different. That is when I felt the local tumor regrowth along his neck. I waffled about my next step- yes, I said no more surgery, no chemo, no radiation, but when you face progression of a terminal disease you rethink bartering and trying to get more time. There I was, spinning around those circles again and I called upon the expert advice of friends and colleagues and finally reached into my heart, no more surgery. So we amped up on getting busy living and not focusing on dying. However, Sunday night I was baffled by this totally acute change. I was preparing for a slower, more insidious flow.

Once again, I reached out to friends and colleagues and I became the hospice client. Yes, I knew our cat had cancer and yes I knew it was progressing but how did we go from normal to acute anorexia with GI signs. With the guided push of several amazing friends (you know who you are!) I did the things I said I wouldn’t do and sought out answers. Things didn’t make sense and Lil Fella was a champ… I really think we all thought he had more meals to savor!

I am not sure that any of the tests or procedure that I had done to help him really changed anything. The water was about as murky clear as it could be…but little by little my big guy continued to gain strength and nibble and by Saturday he was chomping down breakfast again with the best of them.

Why did he get so sick and what helped him? Was I wrong to pursue additional testing or empiric therapies? Did he suffer too much on those days of not eating? Lil Fella basked in the sun, albeit with an empty stomach, but he seemed content to ride out this bump in his road, so we stood beside him and gave him supportive care. And despite or because of my best efforts to help him, he is now begging us for food and laying out on the mulch in the shade on this beautiful day.

I know our cat has a terminal disease and that we need to cherish each amazing day of Lil Fella. But, I got a reprieve and a valuable lesson. Cancer doesn’t always win and sometimes you have to consider that an old sick cat with a terminal disease just might not be dying of his cancer, at least not yet. I have to admit though, watching him not eat and worrying about how bad he was feeling and if I was doing everything right and all that I could took a toll. I work with families who face similar circumstances and struggle and my heart is right there with them.*I feel like I always end up back at the same moral- live and love well and make each moment count. (And don’t forget that sometimes you can look for zebra’s even if you’re supposed to be seeing horse hooves….)

Take care of you.

When to Consider Veterinary Hospice? 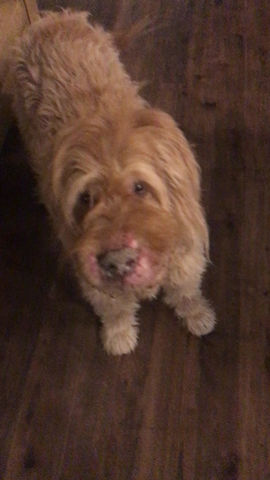 Do you see what I see. May we all see love.

I may not be able to tell you.

What becomes a part of you.